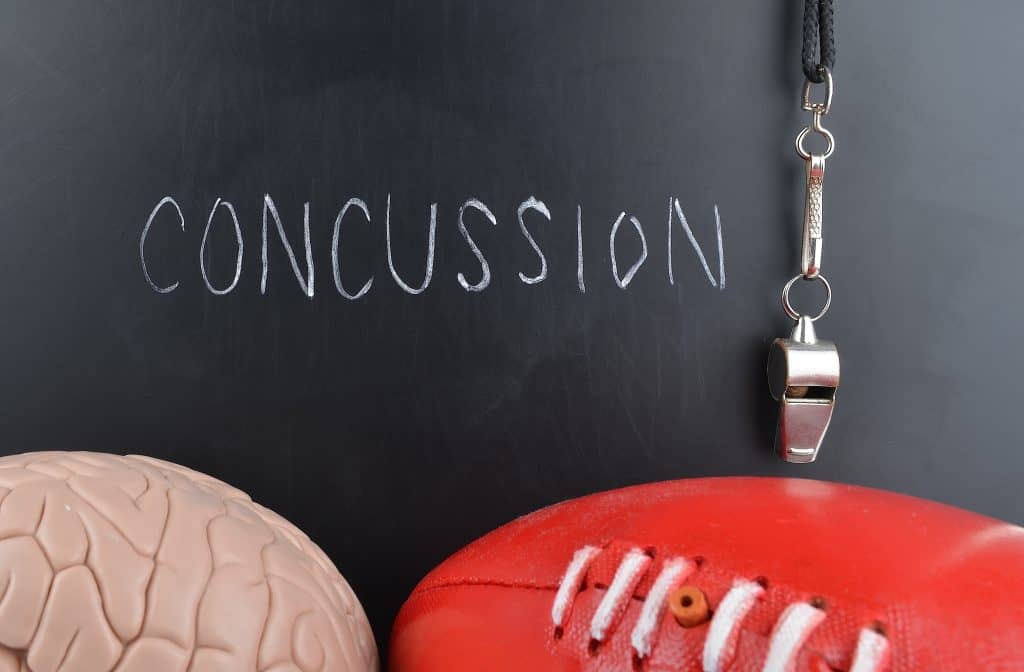 Concussion has been the buzzword in contact sports for years – heard from NFL medical teams to our school athletic trainers. Generally, most coverage in the news is for top athletes – yet on average up to 300,000 concussions occur in high schools across the US in a year.  A concussion is defined as a mild traumatic brain injury characterized by symptoms that affect the head: namely dizziness, headaches, vertigo, nystagmus (twitching of the eyes) and others such as sensitivity to light, reading or physical activity.

A peek behind the anatomy of the brain shows us how some falls or hits can be more damaging than they seem. Our brains are protected by the skull, a strong jigsaw puzzle of bones that are designed to take the initial impact. The brain itself is composed of roughly 86 billion neurons that have consistency similar to jelly. Each neuron is composed of different parts that play a role in how susceptible they are to certain injuries. The neuron has a cell body, where all functions necessary to keep the cell alive occur in.  A long, communicating arm, or axon, travels to the next neuron to pass on information – further assisted by “branch-like” dendrites that take in information from other neurons. Have you ever heard of gray or white matter in the brain? Neuronal organization in the brain can be simplified by these two layers, which represent where cell bodies tend to live – in the gray matter that makes up those folds on the outside of the brain. The axons, bundled and traveling down to the rest of the body to carry messages, make up the white matter.

This is where we get into the physics of getting a concussion – gray matter and white matter have different densities due to their different makeup. Remember Newton’s First Law? Don’t sweat it- I’ll refresh you: an object in motion, stays in motion until it meets a counterforce to stop it. Now let’s put the brain in a common sports scenario: Jesse, a player on his high school’s soccer team, tripped and fell backwards during a game and hit his head on the ground. As his head accelerated to the ground, so did his brain inside his skull. After the initial hit, the brain rebounds and also hits the front of the skull.  Different density of brain tissue will absorb accelerative and decelerative forces at different rates, and possibly cause “shearing” or horizontal tugging motions to occur at this junction point between cell bodies and axons. In severe concussions and traumatic brain injuries, the axons can be severed from the neuron’s cell body due to these shearing forces and take months for recovery. This is why a concussion is effectively a brain bruise, and even mild ones should be allowed to recover before returning back to the game.

Getting back to sport is a team effort! Physical therapists are front-line for helping with recovery from all sorts of bruises, even ones in the brain. PTs are part of a team of care that may include a primary physician, a specialist such as a neurologist, an athletic trainer, as well as a coach, school nurse and teachers to help during recovery.  As mentioned before, this brain bruise causes dysfunction in our regular processing tasks: like attention, concentration, our senses (seeing, hearing, balance) and causes symptoms that affect how we function in our daily lives and PTs determine during the initial evaluation what interventions to use to address these symptoms.

With a clear plan in hand, PTs do what they do best: provide personalized treatment in engaging sessions to start addressing the symptoms that are keeping the student from both class and the field. Jessie complains of severe headaches and difficulty focusing on objects, which has made him also unsteady on his feet. His PT knows what to tackle first: balance training, gaze stabilization exercises and manual therapy for tight cervical muscles at the back of the neck.

One of the treatments I enjoy the most and are effective for dealing with headaches is called joint position sense training. All of our small supportive head controlling muscles – suboccipital muscles – are rich in mechanoreceptors that give positional information to the brain. A common occurrence with concussions is tightness in these muscles in response to original trauma. With tightness, the muscle can’t do its job very well: it can’t relax and contract so it sends the wrong information to the brain, contributing to pain, headaches and difficulty with head movements, especially fine-tuned ones for sports. In joint sense position training for the head, we place a laser pointer on the head and gradually improve motor control with specific tasks like hitting a target or going through a maze. By improving your control over these muscles your brain relearns to listen to these muscles and the mismatch that causes headaches can go away over time.

Physical therapists are instrumental in addressing symptoms that keep a player off the field and the classroom – getting early professional care is important, especially to reduce the risk of another concussion when returning to the field. If you suspect your child has sustained a concussion, it is worth getting properly assessed by a trained professional to ensure a long happy career as a team player.

The ‘Rising Star’ list recognizes early-career physicians across several specialties for their accomplishments. Physicians are nominated by their peers as emerging leaders in their fields.

Dr. Russo practices as a spine specialist at Connecticut Orthopaedics. He graduated from the University of Connecticut School of Medicine, where he was inducted into the Gold Humanism Honor Society. He performed his post-graduate training in orthopaedic surgery at the Yale University School of Medicine and completed his fellowship in Spinal Surgery at the renowned Rothman Institute in Philadelphia, PA. 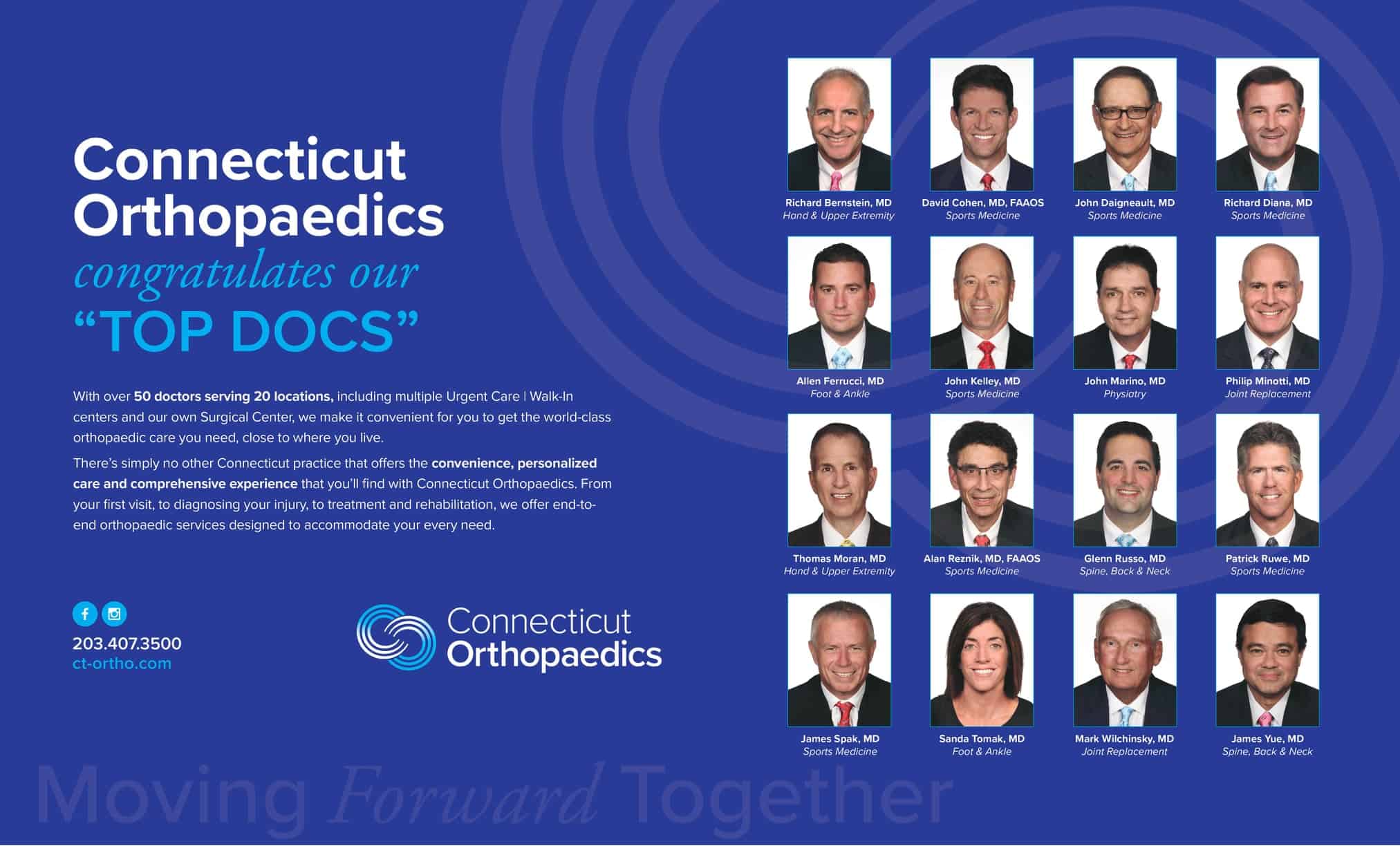 Our expert physicians make it convenient for you to get the world-class orthopaedic care you need, close to where you live.

“I felt that the extensive academic and clinical talents of our large group of physicians could serve a great role in the education of the Quinnipiac medical students,” said Dr. Kramer. “Following discussions with the deans and the directors of the various didactic, clinical and research programs of the medical school, all of whom were highly receptive to the idea, I offered this to our physicians and received a tremendous response, with well over twenty of our doctors able to contribute. The medical school has been thrilled with the results.”

The program began at the start of the ’21-’22 medical school academic year, and education was provided in the basic sciences, anatomy labs, and clinical rotations. Additionally, research projects are now under way.

“We’re looking forward to the upcoming academic year,” said Dr. Kramer. “Furthermore, in July 2023 the medical school will be starting its first ever residency program in Rural Family Medicine – for which significant exposure to orthopaedics is required. Given the success of this past year’s effort, they have requested our services for the residency as well. It should be yet another gratifying experience for all involved.”

For more than a decade, Dr. Shirvinda Wijesekera has been traveling the globe with World Spine Outreach and Butterfly Foundation to treat patients with scoliosis.

With the goal of providing high quality care to the most profoundly severe cases, and teaching local physicians and medical staff, these organizations bring state-of-the-art orthopaedic techniques, expertise, and technology where it’s needed most. This year, Dr. Wijesekera, accompanied by Dr. Glenn Russo, surgically treated 21 patients in the Dominican Republic.

“Without corrections, their deformities would progress, leaving them disfigured and unable to participate in society and live a normal life,” said Dr. Wijesekera. “They are wonderful patients and are deeply appreciative. It is one of the most satisfying things I am lucky to be a part of.” 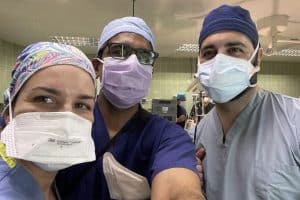 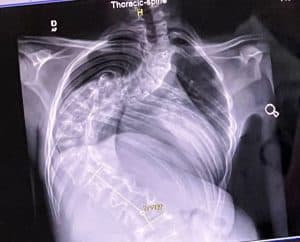 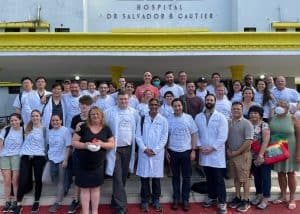 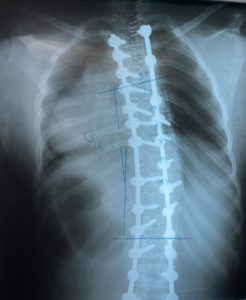 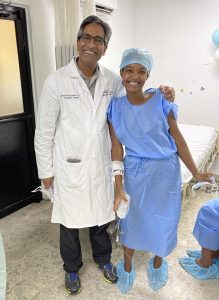