When Do You Need Partial Vs. Total Knee Replacement?

Painful arthritis of the knee affects up to 10% of the general United States population over 65 years of age. As a result, data estimates that approximately 350,000 total knee replacements are performed each year in the United States. In the past, knee replacement was typically reserved for the elderly, more sedentary patients with significant disease throughout the entire knee. Increasing demand from younger, more active patients with variable amounts of knee disease has prompted advances in knee replacement designs and techniques and has led to expanded use of total and partial knee replacement. In patients with severe arthritic disease affecting only one compartment, it may not be necessary or wise to replace all three joint surfaces.

In joints that rely on more than one cartilage interface, like the knee, arthritis may not significantly affect all of these opposing cartilage surfaces. Therefore, it is not always necessary to replace the minimally diseased surfaces nor is it necessary to sacrifice, as extensively, essential stabilizing ligaments, muscles or tendons. Knee replacement replace individual diseased compartments while leaving healthy joint surfaces and normal knee stabilizing ligaments intact. 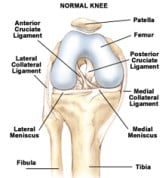 The knee joint consists of three equally important and separate cartilage interfaces. The medial(inside) and lateral(outside) compartments are used while walking. The opposing smooth and slick cartilage. The stability and distribution of weight within these compartments is aided, in each, by the meniscus. Stability is further maintained in these compartments by the anterior and posterior cruciate ligaments(ACL and PCL) and, with assistance from both menisci and the knee cap, are responsible for antero-posterior (front to back) stability of the knee. The medial and lateral collateral ligaments control side to side stability. The interactions between normal medial and lateral cartilage surfaces and surrounding ligaments, muscles and tendons are essential for optimal knee stability, mechanics and function.

The undersurface of the knee cap, the patello-femoral joint, is the third joint in the knee. With the hamstrings, the knee cap and attached ligaments are the stabilizers preventing “buckling” of the knee and assisting in maintaining optimal knee motion. The relatively small cartilage at the patello-femoral joint experiences extremely high pressures. It functions to improve the strength and efficiency of the extensor mechanism (kicking muscles). These pressures are higher when rising from chair and stair climbing. It is not surprising that pain behind the knee-cap frequently accompanies the development of painful arthritis in other compartments in the knee.

In patients with disease affecting two or three compartments (ie: medial, lateral and patello-femoral), the most predictable long-term pain relief is achieved with a total knee replacement (TKR). TKR involves a measured removal of all cartilage and a small amount of its underlying bone from the distal femur, proximal tibia and the undersurface of the patella. Each surface is “capped” with polished and extremely smooth metal and/or plastic to replace, as equally as possible, the diseased and surgically removed bone and cartilage. The MCL and LCL are left intact and the extensor mechanism is repaired during closure.

Single compartment knee replacement, is most commonly performed for knees with isolated pain medially (inside). The typical patient is a moderately active patient who does not engage in extensive heavy labor activities who complains of isolated medial knee pain. History, physical examination and radiographs should isolate the symptoms to an individual compartment without the involvement of the other two compartments. Patients complaining of medial joint line pain, medial pain with ambulation and particularly with stair climbing or squatting should be absent. The exam should show well maintained joint spaces and absence of pain in both the lateral and patello-femoral compartments.

The benefits of UKR design are the ability to retain important structures necessary for optimal stability and function in the knee. The ACL, PCL, collaterals, opposite compartment meniscus and cartilage surfaces at the opposite and patello-femoral compartment are not violated in UKR. This allows improved post-operative stability and more normal knee mechanics than that achieved with a TKR. In addition, the synthetic surfaces utilized in knee replacement do not reproduce the smooth, resilient, low friction surfaces of healthy intact cartilage on healthy intact cartilage. Two of the three compartments in UKRs retain these optimal opposing healthy joint surfaces. A final benefit of performing a UKR is a more limited exposure. The incision into the quadriceps tendon(thigh muscle) is smaller than a standard incision for a TKR. This limited exposure theoretically decreases post-operative thigh weakness and incisional pain, leading to a more rapid rehabilitation course.

The benefits of UKR are numerous and include a less invasive surgical technique, maintenance of stabilizing structures, improved post-operative knee mechanics, improved.rehabilitation and variable postponement of a more involved TKR. However, UKR has particular indications and may be unsuccessful and ultimately detrimental if utilized in the wrong patients. While all patients with isolated single compartment disease are candidates for UKR, each candidate must be evaluated on an individual basis taking lifestyle, patient expectations, weight, cause of arthritis, stability and deformity into consideration. In those patients with expectations to return to heavy labor activities, overweight patients, ACL deficient patients, patients suffering from inflammatory arthritis and those with fixed deformities should consider alternative treatments including proximal tibial or distal femoral realigning osteotomies or total knee replacement. Remember, the best results occur only when the surgery matches the problem at hand.