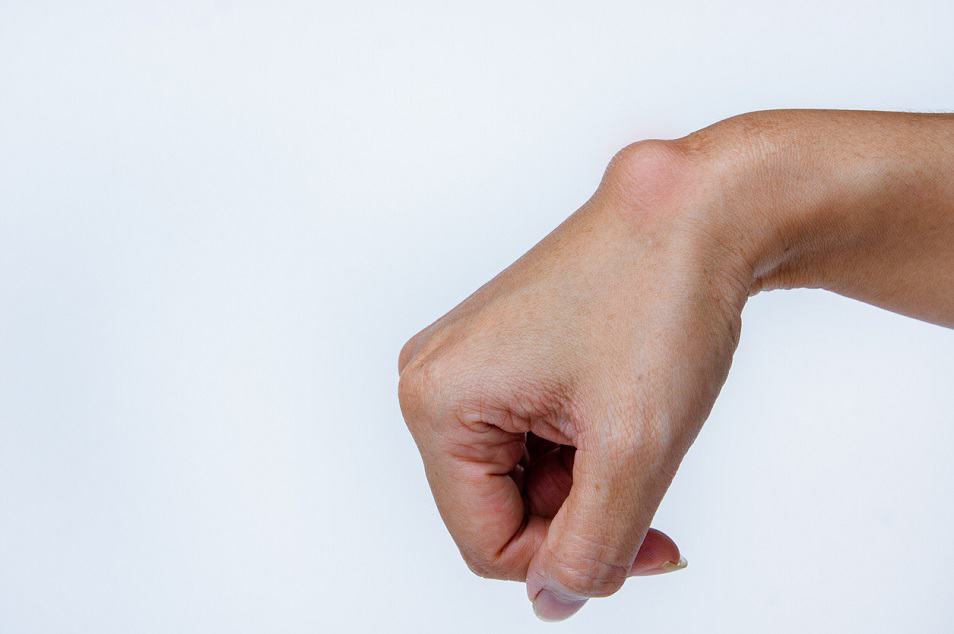 Ganglion cysts are masses usually found around the wrist, although they can be found in other places. The ganglion cyst is not associated with nerves, but with joints and tendon sheaths. Ganglion cysts are small outpouchings of joint capsule, which is the sleeve of tissue that encloses a joint, or tendon lining tissue if they are found near a tendon. It consists of an outer fibrous coat and an inner synovial lining and contains a clear, colorless, gelatinous fluid.

Other Kinds of Ganglions

There are two other types of ganglion cysts that are common in the hand. A ganglion cyst associated with arthritis of the DIP joint (the one closest to the fingertip) is called a mucous cyst (see photograph below). A ganglion cyst associated with a tendon is called a tendon sheath ganglion or a retinacular cyst, and is usually a small, very hard, 2-4 mm ball at the base of the finger, on the palm side. These latter two types have a number of special characteristics that are not covered on this page. I will discuss these with you during your visit.

All ganglion cysts (“cyst” just means fluid-filled container or hole) are, as I stated above, outpouchings of joint capsule, which is the sleeve of tissue that encloses a joint, keeping in the lubricating joint fluid. The tendon sheath ganglion arises from the similar lining of a tendon, but only when that tendon is one that is enclosed in a structure analogous to a joint capsule. The reason for this is that most joints and some tendons have their contents under Mucous Cyst. In all probability (although this has not been proven) the ganglion represents a form of “blow out” of this enveloping sleeve around the fluid filled joint or tendon sheath. Once formed the ganglion may then grow by either continued leak of fluid under pressure or (some suggest) by the formation of a one way valve effect between the joint and the cyst. What is certain is that the joint becomes filled with a jelly that is clear and viscous and contains some of the constituents of the joint fluid (itself a very specialized fluid adapted to lubricate and nourish the joint structures).

When to Treat a Ganglion

Ganglions become symptomatic when they grow large enough to be obtrusive, or when they compress surrounding structures causing pain, or rarely they can cause nerve damage from compression. They are very common and also very poorly understood. We are not entirely clear on the causes of ganglions or even what will happen if they are not treated. They are common in young or middle aged people but rare in the elderly. Do they just go away by themselves? Some good evidence exists to suggest that they do spontaneously grow smaller or go away in time, but this may take some time. I had a ganglion on each of my wrists in my 20’s that improved within a couple of years. Some ganglions will continuously enlarge, especially if they are due to arthritis.

How Do You Treat Ganglions?

One form of simple treatment is aspiration and essentially rupturing the ganglion. The “old wives’ tale” used to be to hit it with a bible. Though we don’t hit our patients, the aspiration of the ganglion I believe does the same thing. By allowing the fluid to escape, like the air in a balloon, often times the fluid will dissipate into the surrounding tissues and the body will gradually absorb the lining. The ganglion may become less tense and less painful and in my experience works about half the time with one aspiration. Generally if it does return, I would suggest a second or even third try. Though no one likes needles, me included, this can be an easier approach than surgery.

Excision (surgically removing it) is indicated if the ganglion is causing local pressure effects or pain (common on the back of the wrist), or is so big it is unsightly. Recurrence does happen (about 30-40% documented in a recent study out of Europe), and is usually related underlying pathology. Some ganglions can be approached arthroscopically with some studies suggesting a lower recurrence rate. With open surgery, the recuperation, believe it or not can take 4-6 weeks. It is not unusual for the wrist to become somewhat stiff requiring therapy. Many people assume that surgery simply involves removing a bump. Though conceptually it does, ganglion cysts usually arise from the joints in the wrist. To minimize the chance of recurrence hand surgeons recommend tracing the cyst down to its joint origin. A ganglion is almost like a mushroom. You cannot just remove the cap of the mushroom (the ganglion) but also need to remove its stalk.

Mucous cyst ganglions are a problem due to the prominence at the finger joint, and may recurrently drain. Tendon sheath ganglions usually hurt when you grip, because they are found just under the skin overlying the bone.