Gamekeeper’s Thumb, also called Skier’s Thumb, is an injury to the thumb on the little finger side, at the second joint from the thumbnail (MP joint). The ligament can be either torn itself, or the ligament can be torn from the bone, usually pulling a small fragment of bone off with it, as illustrated below. 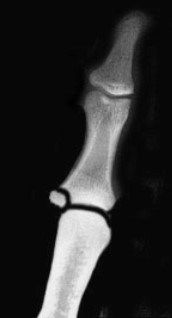 This is a view of the thumb from the top, looking straight down on the thumbnail. Note the broken fragment of bone from the middle phalanx. (Note: this x-ray has been modified to remove the sesamoid bones, which can be confused with fracture fragments.) 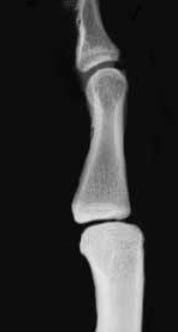 This is a view of the thumb from the side. You cannot see the fracture fragment, since it is in the middle of the bone on this view. What you can see is that the joint is not parallel: the bones are closer to the right than to the left. (Again, the sesamoids have been removed.)

Gamekeeper’s thumb is clinical instability of the first MP joint caused by an insufficiency of the ulnar collateral ligament (UCL) in the MP of the thumb. Because the stability of the thumb is important for holding things between the thumb and the index finger, treatment is directed toward optimizing the healing of the ligament to restore its full function. Gamekeeper’s thumb is a common injury. The incidence is increased in skiers, but it does not depend on the type of ski pole used.

Challenges in Establishing the Nature of the Injury

If the history (typically a fall that stressed the thumb) and the clinical exam (painful, swollen thumb MP joint, especially on the index finger side of the thumb) are suggestive of an injury, an x-ray should be taken. If the x-ray does not show a fracture (no gamekeeper’s fracture), but the history and clinical exam show a sufficient injury, there still might be a gamekeeper’s thumb (the kind with just a ligament injury), which is actually more serious. The reason is due to the anatomy of the thumb. The muscle on the index finger side of the thumb (adductor) has an expansion called the aponeurosis, which usually gets stuck between the ruptured ligament and its site of insertion at the base of the proximal phalanx, preventing the ligament ends from touching. This is called a Stener lesion and prevents the ligament from healing back together. This lesion also can be associated with the gamekeeper’s fracture, but this can usually be seen on the x-ray, because the fracture fragment is several millimeters away from where is it supposed to be. The real challenge is to diagnose a gamekeeper’s thumb due to a ligament injury, since the ligaments don’t show up on the x-ray! At times, an MRI may be useful.

The best way to decide if the ligament is ruptured is to stress the joint. If the pain is enough to prevent a good stress examination, the joint may be anesthetized with a Lidocaine injection prior to stress testing. If the ligament is loose (called laxity) by about 35°, or if the injured thumb has more looseness (laxity) than the other thumb by 15° more, the collateral ligament is ruptured. Stress testing with the thumb slightly flexed tests the ligament itself. Stress testing with the thumb in the extended position is the best test for determining the competence of the lower part of the ligament, called the accessory collateral portion of the UCL. If laxity of the MCP joint is present in both the flexed and extended positions, complete UCL rupture should be suspected.

Splinting or casting is appropriate for injured thumbs and the ligament is not loose or is only very slightly loose. These are called partial tears, that is, grade I or grade II tears, of the UCL. These tears usually involve an isolated rupture of the proper collateral ligament. Splinting or casting is also appropriate when there is a fracture, but the fragment of bone is displaced only a millimeter or two. The splint or case should immobilize the thumb for 4 weeks. With appropriate closed treatment, good to excellent results can be expected in 90% of such injuries. Surgery is needed when there is too much looseness of the ligament (it is probably ruptured and the Stener lesion will prevent it from healing) or if there is a fracture and the bone fragment is displaced. Without surgery, the joint will be floppy, will probably develop arthritis, and the thumb will not be able to oppose the index finger (useful for things like opening a door with a key!). Occasionally, significant ligamentous injury may occur without immediate gross instability, which can be masked by swelling and muscle spasm. At this point, a repeat examination can be performed after 1 week; and if swelling persists and motion has not been regained, surgical fixation may be considered.

What Happens If Surgery is not Performed?

Sometimes the injury is not diagnosed or the patient decides against surgery. This creates chronic instability of the thumb. This is difficult to treat. Just trying to repair the ligament late has limited success. Even surgical repair performed 6 weeks after the complete UCL rupture has limited success. Essentially, the longer a complete rupture of the UCL exists, the smaller the possibility of stability restoration with anatomic repair. Fractures may not be repairable. Ligament injuries need to be reconstructed.

What is the Surgery?

The surgical procedure involves a 1 inch incision, opening the muscle, and replacing the bone fragment or repairing or replacing the ligament.

What is the Recovery?

Postoperatively, most patients will be casted and then a splint that but can be removed specialized exercises. Great care must be taken not to stress the repair! Three months after surgery, full activities can be resumed.

Chronic instability of the MCP joint can occur despite a good repair, especially if motion and return to play are resumed prematurely. This instability is difficult to treat and can lead to arthritic changes in the MCP joint, as well as a weak pinch grasp in the long term.

Stiffness of the MCP and IP joints is a common complication. This stiffness is usually not a functional problem, and it tends to improve with time.

Neuropraxia of the radial sensory nerve may occur, even if care is taken to isolate and protect the nerve. The neuropraxia usually resolves spontaneously.

Early diagnosis is the most important factor that determines the functional outcome. In thumbs with partial ligament injuries, nonsurgical treatment by means of immobilization yields a stable, painless thumb in most cases. In more than 90% of complete ruptures that are surgically treated within 3 weeks of the injury, a good-to-excellent result can be expected. Pain and stiffness can be expected to be mild or absent, and pinch and grip strength will be nearly normal. The rate of return to former activities, including recreational sports, is reported to be as high as 96%. The failure to diagnose this injury and the patient’s failure to seek medical treatment are the most common reasons for a poor outcome.

In complete tears, the failure rate of treatment with bracing and early motion is 50%. If a patient is unable to tolerate or refuses surgery, the use of a brace or thumb spica is the treatment of choice. However, full stability of the thumb is unlikely. The prognosis for all repairs and reconstructions undertaken more than 6 weeks after a complete UCL rupture is not as good as early treatment. However, good (but less than normal) motion can be obtained.