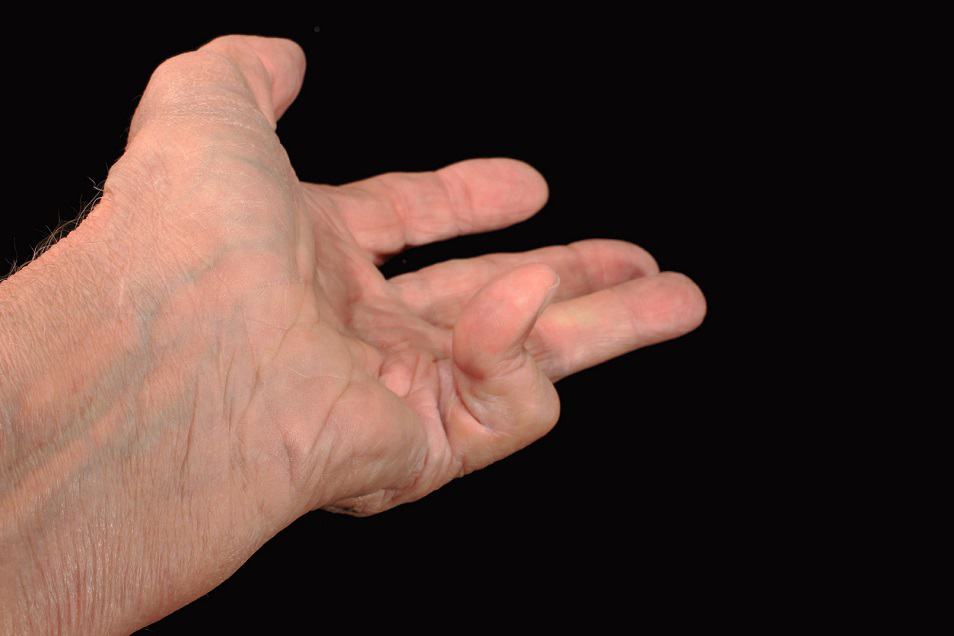 Dupuytren’s disease is a condition that affects the palm of the hand, forming contracted cords. It is more common in men and found most commonly in people with a Celtic genetic background (Irish, Scottish, Scandinavian, Northern European), although it is found in people of many different ancestries. It affects the connective tissue in the palm known as palmar fascia (normal tissues are shown in the illustration at the right), which is the tissue that helps stabilize the palm skin. The palmar fascia starts near the wrist, divides into bands (known as “pretendinous” bands) as it goes to the fingers.

It can then split into two bands that attach to the natatory ligament and into the sides of the fingers.

Dupuytren’s contracture is a fairly common condition that occurs when the connective tissue under the skin (specifically, the pretendinous bands of the palmar fascia) begins to thicken and shorten. As the tissue tightens, it may pull the fingers down towards the palm of the hand. In some individuals, the condition may progress until the involved fingers become disabled.

Who is at risk?

Men. The incidence of Dupuytren’s contracture is about seven times higher among men than among women.

People of middle age. Most of the time, Dupuytren’s contracture doesn’t show up until after age 40. However, a very aggressive form may rarely appear in teenagers and children.

The first sign is a thickening (nodule) in the palm of the hand that most frequently develops near the base of the ring or little finger. The nodule, which can resemble a callus, is painless but may be tender to the touch. Gradually, a thickened tissue of palmar fascia forms from the pretendinous band and becomes a cord. This may extend across a joint, causing a contracture as the cord shortens. The overlying skin begins to pucker, and cords of tissue extend into the finger. As the process continues, these cords tighten and pull the finger in toward the palm. The ring finger is usually affected first, followed by the little, long and index fingers. The problem is not pain, but the restriction of motion and the deformity it causes.

The progress of the disease is often sporadic and unpredictable. Exactly what triggers the formation of nodules and cords is unknown. As the disease progresses, the diseased tissue wraps itself around and between normal tissue. Many people do not seek medical care until the contracture is well advanced. Until recently, the only treatment for this condition is surgery, which is usually reserved for individuals who have developed deformity as a result of the progressive contracture. New nodules do not necessarily progress to contracture and because scar tissue from previous surgeries can make excision of recurrent nodules more difficult, surgical removal of isolated nodules is not indicated in most cases.

A good guideline for determining when to consider surgery is the “tabletop test.” Try to place the palm of your hand completely flat on a hard surface. If you can’t, the contracture has progressed to a point where surgical intervention could be helpful. Dupuytren’s can also be associated with thickening of the knuckles on the back of the hand or thickening of the tissue on the sole of your foot. Men can rarely get a band of tissue in their penis, called Peyronie’s, if so we can have you see a Urologist who specializes in that.

Unfortunately there are no splints, exercises, pills or simple “cortisone” injections that can improve the course of Dupuytren’s. Many of these techniques have been tried without success. Xiaflex is an injection that was FDA approved in 2010. It is an enzyme based on the Clostridium bacteria. The medication has been studied and trialed, and has undergone numerous studies on its efficacy in treating certain cases of Dupuytren’s. Xiaflex does not “get rid” of the Dupuytrens; it helps erode the cord so that the cord can be broken to correct the contracture. There are risks that include a flare reaction, tendon rupture, skin tear, nerve injury, and recurrence. The best contractures are bands at the MP joint and those with a centraI band. Bands and contractures that extend to the PIP joint also respond to Xiaflex, but not as successfully as an MP joint contracture. I have used Xiaflex extensively and have presented results at the American Society of Surgery of the Hand meeting and will be happy to discuss whether your Dupuytren’s is a candidate for the medication. In my experience, when you are a candidate, the results have been gratifying and much easier for my patients to recuperate from than surgery.

When surgery is needed, every case has subtle differences and we can discuss the techniques based on the extent of the contracture and disease. The aim of the surgery is to release the contracture and improve hand function by removing the diseased tissue. The results of surgery are usually good, and the fingers can return to good extension after therapy. You need to be dedicated to your post-operative therapy. Probably more than any other condition I treat with surgery; you need to be dedicated to wearing a splint, doing your exercises and working with a therapist. If you are not going to be able to wear the splints and exercise, it is not worth having the surgery. Some studies suggest nighttime splinting for 6 months after the surgery. However, the disease can return even some years after the initial surgery. Dupuytren’s contracture usually does not recur beneath a skin graft, so this may be an option in especially aggressive forms of the disease. There has also been a resurgence in another option based on a Scottish surgeon, termed the McCash technique. This involves intentionally leaving open part of the incision at surgery. By leaving it open it diminishes tension on the skin and decreases the chance of a blood clot (hematoma) developing under the skin. In severe contractures, this is a technique that I may discuss with you for in some cases it is a better option than putting a lot of tension on the skin. The skin heals on its own within 2-5 weeks depending upon the extent of the open area; the therapist and I will discuss how to care for your hand.

It’s important to keep the appointment for hand therapy after surgery. You will have to wear a splint so that the fingers stay extended during the day and at night. The splint is usually worn full time immediately after the surgery and then only at night for several months. You will also have to do some active range of motion exercises so that the finger retains mobility and strength.

Many patients ask about return to work activities after a Dupuytren’s release. Everyone is different, but here are some guidelines. I encourage you to return to any activities that you want as soon as the dressing is off, as long as the hand remains clean and dry. Keyboarding, playing a musical instrument for instance are both great therapies to help restore hand function. These are only rough guidelines which will give you some idea of what to expect.