Recovery, because the surgery is so much less invasive, is also much quicker than traditional therapies have been in the past.

Pain is what most patients associate with a diagnosis of Spinal Stenosis which is most commonly caused by wear-and-tear changes in the spine related to osteoarthritis. According to The American Academy of Orthopedic Surgeons, spinal stenosis affects an estimate of 8 to 11 percent of the population, and is most common in people over the age of 50.

Until the invention of the Superion Indirect Decompression System (Superion), the more invasive open surgical decompression surgery was often recommended for relief which could require hospitalization and posed a greater risk of infection, and a longer road to recovery. For patients who suffer from moderate spinal stenosis, Superion is proving to be a more effective alternative to more invasive surgery. 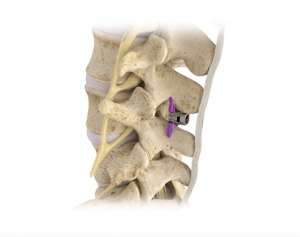 “Superion is done in an outpatient setting without having to expose the patient to a hospital, where there is a greater risk of infection,” explains Dr. Gene Tekmyster, a Physiatrist at The Orthopaedic and Sports Medicine Center (The OSM Center), a division of Connecticut Orthopaedics. “It takes a half hour to 45 minutes to do and you go home the same day. Recovery, because the surgery is so much less invasive, is also much quicker than traditional therapies have been in the past.” Dr. Tekmyster was the first in Connecticut and all of New England and remains the most experienced in performing this procedure.

Superion can be the best option for patients who have tried six months of conservative care treatment without finding relief from their pain, or where traditional spinal surgery could be too demanding. According to Dr. Tekmyster, during the procedure “The Superion device is implanted into the spine and continues to stay there, allowing continued pain relief. It is the only device of its kind that allows us to do that.” After the procedure, patients may experience a significant reduction in leg pain within the first few days.

About The OSM Center: