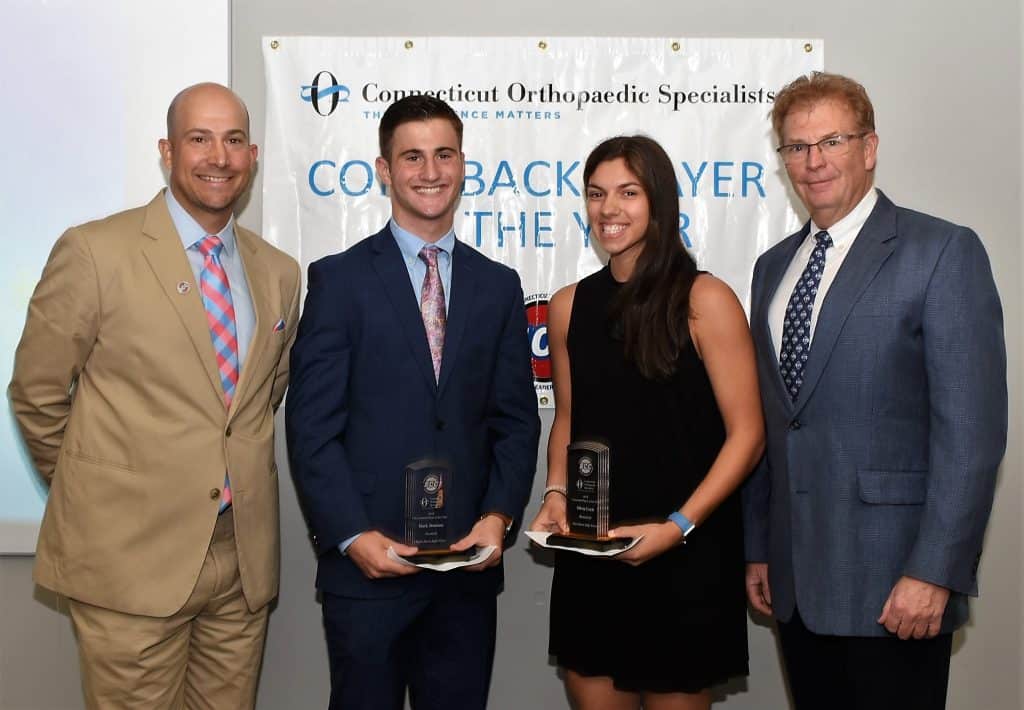 Two student athletes – Olivia Coyle (East Haven) and Mark Montano (North Haven) – are the recipients of the 2018 SCC “Comeback Player of the Year” awards. Both students suffered severe injuries, yet were able to overcome them to become outstanding role models in their respective schools. A corporate sponsor of the Southern Connecticut Conference (SCC), Connecticut Orthopaedic Specialists P.C. (COS) has offered a Comeback Player of the Year Scholarship for student-athletes who participated in an interscholastic sport during the 2017-2018 academic year and showed great leadership both on and off the field after their severe injury. Coaches and school’s athletic directors nominated these student-athletes after they each suffered an unfortunate injury that prohibited them from play for their high school teams. Both will receive a financial scholarship to be used for their college education. “This is our eighth year in awarding student-athletes from the SCC with scholarships,” explained Glenn Elia, Chief Executive Officer of COS. “Our goal has been to acknowledge student-athletes who have overcome the challenges of an injury and, through hard work and determination, have become positive role models for their fellow teammates. Because sports medicine and rehabilitation is one of the many subspecialties that COS offers, we understand intimately what it takes to recover from an injury and return to playing sports at a high level.” “Many thanks to the doctors and staff at Connecticut Orthopaedic Specialists for their support of the SCC and these scholarships,” explained SCC Commissioner Al Carbone. “Our league has many outstanding student-athletes who excel in the classroom and on the playing fields; but it is a tremendous gesture to recognize traits like courage, perseverance and selflessness.”

2017-18 SCC/Connecticut Orthopaedic Specialists Comeback Players of the Year
MARK MONTANO, North Haven (football)
Mark tore his labrum in his right shoulder midway through his junior year, and continued to play despite his injury. He received surgery in the February 2017, and undertook the rehabilitation to return to the field in the fall. And return he did. Mark led the Indians in all offensive and defensive categories, propelling the team to the Class L state playoffs. He earned consensus All-State honors, and was the SCC Tier 1 Co-Player of the Year. North Haven head football coach Anthony Sagnella said, “Mark was our guy. He was our captain, our leader and the hardest working player in our program. He is honorable, selfless and courageous. He exemplifies what every student athlete should hope to be.” Mark will attend the University of Connecticut in the fall with plans to major in biology and then attend dentistry school.

OLIVIA COYLE – East Haven (basketball)
Olivia sustained a meniscus tear in her left knee during the last part of the 2016-17 season, one that saw her earn All-SCC honors for her efforts. Through her diligent rehabilitation, Olivia returned to the team for the 2017-18 season, yet was dealt another setback when she injured the same knee the first week of practice. She had surgery again, and went through another bout of rehab to return to the court. Olivia’s second comeback to the court was indeed admirable; but her positive attitude, persistence and leadership she exhibited were integral reasons the Yellowjackets ascended to their first appearance in the SCC title game, and earned the program’s first-ever state championship (Class M). East Haven head girls basketball coach Anthony Russell said, “When Olivia was hurt, she knew there was light at the end of the tunnel. She was remained enthusiastic, which helped her and her teammates. The end result was spectacular for her and her teammates, and she deserves credit for her drive and determination.” Olivia will attend Pace University in the fall with plans to major in finance.

ABOUT THE SOUTHERN CONNECTICUT CONFERENCE
The 2017-18 academic year marks the 24th year of existence for the Southern Connecticut Conference. The SCC is comprised of 23 high schools with more than 23,000 students representing 16 communities. Recognized as one of the best athletic conferences in the state, the SCC also has a great tradition of offering first-rate non-athletic programs and events that enrich the overall high school experience of our young people to help them become responsible students, athletes and citizens. For more information on the SCC, visit www.southernconnecticutconference.org