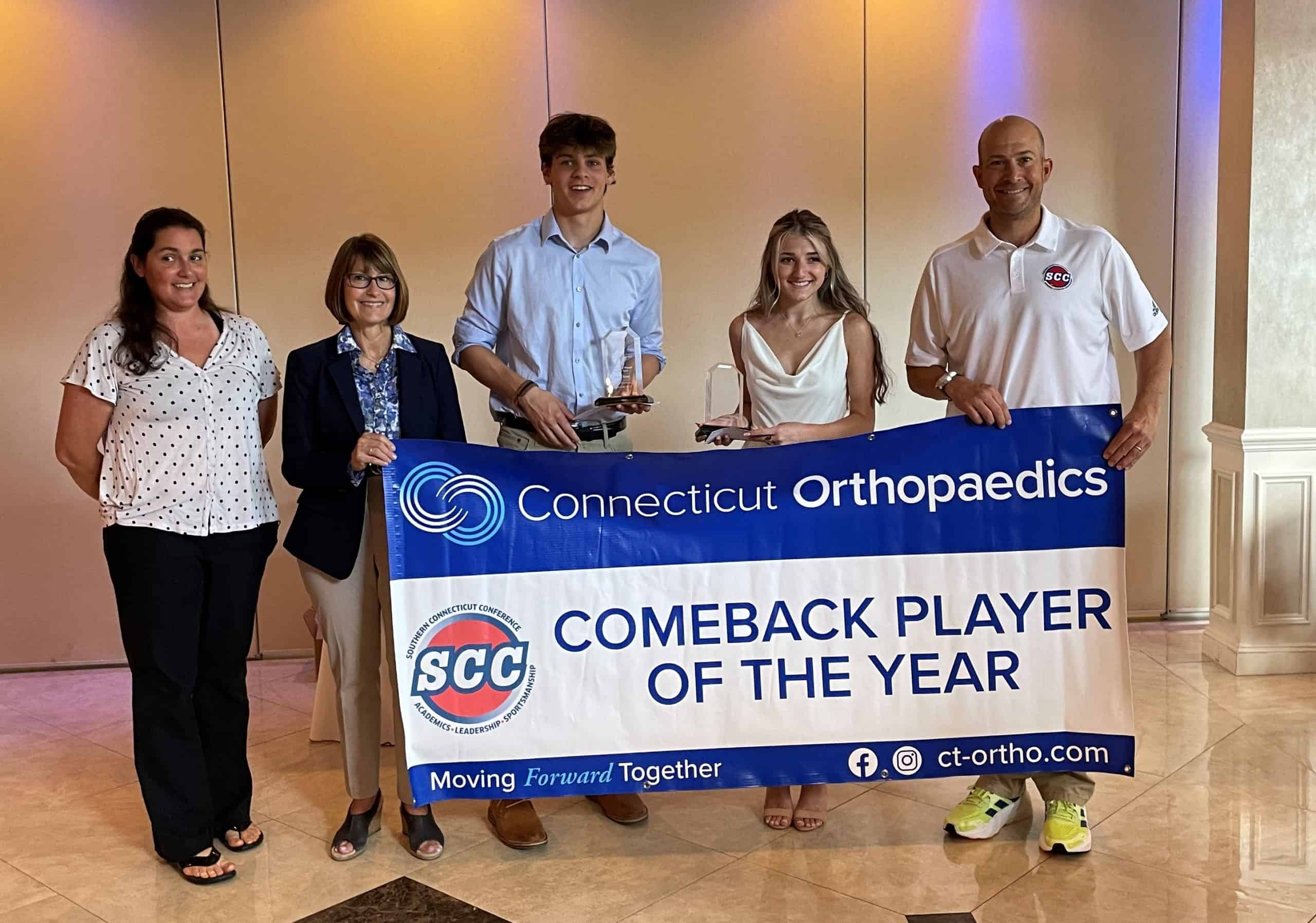 Two student athletes – Maxine Samperi (North Haven HS) and Jason Raba (Cheshire HS) – are the recipients of the 2022 SCC “Comeback Player of the Year” awards. Both students suffered severe injuries, yet were able to overcome them to become outstanding role models in their respective schools.

A corporate sponsor of the Southern Connecticut Conference (SCC), Connecticut Orthopaedics offered a Comeback Player of the Year Scholarship for student-athletes who participated in an interscholastic sport during the 2021-2022 academic year and showed great leadership both on and off the field after their severe injury.

“This is our 12th year awarding student-athletes from the SCC with scholarships,” said Susan Bader, CEO of Connecticut Orthopaedics. “Our goal is to acknowledge student-athletes who have overcome the challenges of an injury and, through hard work and determination, become positive role models for their fellow teammates. As sports medicine specialists, we have an excellent understanding of what it takes to recover from an injury and return to playing sports at a high level.”

“Many thanks to the doctors and staff at Connecticut Orthopaedics for their support of the SCC and these scholarships,” explained SCC Commissioner Al Carbone. “Our league has many outstanding student-athletes who excel in the classroom and on the playing fields; but it is a tremendous gesture to recognize traits like courage, perseverance and selflessness.”

A four-year member of the Nighthawks’ successful cheer team, Maxine suffered a torn labrum in her right hip (twice) and a broken left arm, but through her diligent rehabilitation and positive attitude was able to return to lead the squad to a SCC championship and a Class L state title as a flyer in 2019.

This past winter, she served as a captain and was a key part of the team’s second-place finish at the Class L state championship meet.

An honor roll student, she was the recipient of the team’s Sportsmanship award. Maxine will attend Endicott College in the fall with plans to major in criminal justice.

A two-sport standout for the Rams, Jason suffered a season-ending posterior hip dislocation in October 2021 while making a tackle from his defensive end position. He was diagnosed with gluteus medius tearing and bone bruising secondary to the dislocation. After a period of non-weight bearing, Jason began therapy to regain his range of motion. Although he was not able to return to the playing field for the during football season, he stepped up as a leader off the turf to support his teammates.

After more than two months of rehab, he returned to lacrosse workouts in preparation for the spring season. Jason earned All-SCC Second Team honors for his outstanding play at the attack position this spring and has led the Rams to a SCC championship and Class M semifinal berth.

Jason will play lacrosse at St. John’s University next year and intends to major in business.