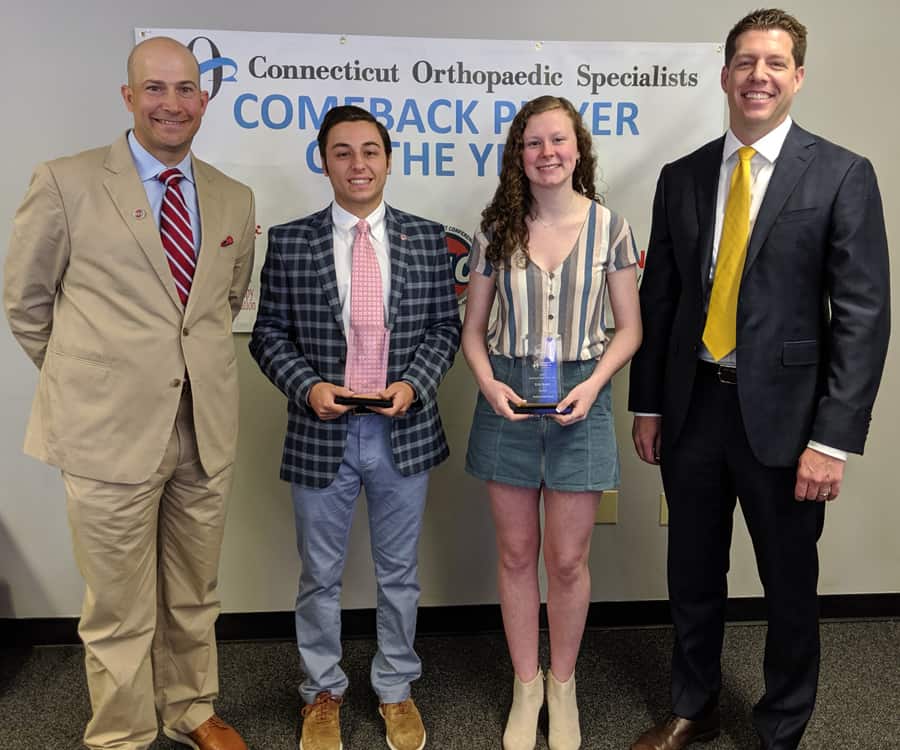 Two student athletes – Erin Keary (Shelton HS) and Thomas LaTorre (Daniel Hand HS) – are the recipients of the 2019 SCC “Comeback Player of the Year” awards. Both students suffered severe injuries, yet were able to overcome them to become outstanding role models in their respective schools. Sports Medicine Specialist, Dr. Jeffrey Klauser (Erin’s orthopaedic doctor) was on hand to present the awards.

A corporate sponsor of the Southern Connecticut Conference (SCC), Connecticut Orthopaedic Specialists P.C. (COS) has offered a Comeback Player of the Year Scholarship for student-athletes who participated in an interscholastic sport during the 2018-2019 academic year and showed great leadership both on and off the field after their severe injury.

“This is our ninth year in awarding student-athletes from the SCC with scholarships,” explained Glenn Elia, Chief Executive Officer of COS. “Our goal has been to acknowledge student-athletes who have overcome the challenges of an injury and, through hard work and determination, have become positive role models for their fellow teammates. Because we are sports medicine specialists, we understand intimately what it takes to recover from an injury and return to playing sports at a high level.”

“Many thanks to the doctors and staff at Connecticut Orthopaedic Specialists for their support of the SCC and these scholarships,” explained SCC Commissioner Al Carbone. “Our league has many outstanding student-athletes who excel in the classroom and on the playing fields; but it is a tremendous gesture to recognize traits like courage, perseverance and selflessness.”

Thomas LaTorre, Daniel Hand HS (soccer)
Tommy tore his ACL in the spring of his junior year, while playing at a college showcase soccer tournament. He received surgery in April 2018 and undertook extensive rehabilitation – most of the time in the morning before school started – to return to the team, one that was coming off two straight Class L state titles and one he would serve as one of the team’s captains. During his physical therapy, Tommy worked diligently and was cleared to play mid-season (in October) and was a catalyst as the Tigers earned their third straight Class L state title, culminating with a 2-1 victory over Maloney on November 18.

Daniel Hand head soccer coach Greg Cumpstone said, “While injured, Tommy served as a source of support and leadership to his teammates. His return to the field gave the team the fire that was infectious; he was up for any battle, and his actions on the field became crucial to the team’s late-season state championship run.” Tommy will attend Elon University in the fall with plans to major in sports management.

Erin Keary, Shelton HS (soccer)
A four-year starter at defensive center, Erin sustained an ACL injury during the 2017 state girls soccer tournament. Erin showed her dedication through the rehab process, following the regiment set for her with diligence and persistence, starting with spring workouts, into the summer and fall preseason. Her return to the field in 2018 was admirable, but also impressive. She played in all 20 games, leading the team in minutes played and also scored six goals and added four assists from her defensive position. For her efforts, she earned All-SCC and Second Team All-State honors.

Shelton head girls soccer coach Marvin Miller said, “Persistence has always been Erin’s strongest character attributes along with her extremely high personal expectations she puts on herself as a student and as an athlete. With that, she has earned the respect of her opponents and teammates and holds a place of honor with them.” Erin will attend the University of Connecticut in the fall with plans to major in Allied Heath Sciences.