Better understand your shoulder pain, including the causes and treatment options, in this interactive class with Dr. Eric Padegimas. 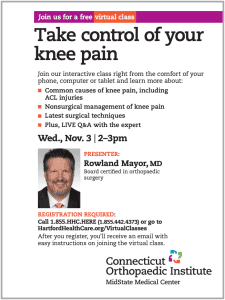 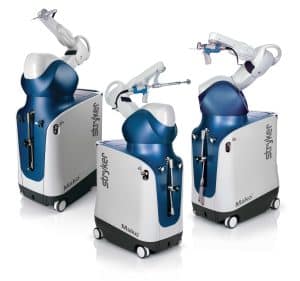 For total hip procedures, a treatment option for adults who suffer from degenerative joint disease of the hip, the surgeon guides the robotic arm to position the implant according to the predetermined surgical plan. In a controlled matched-paired study, results suggested greater bone preservation for Mako Total Hip compared to manual surgery. 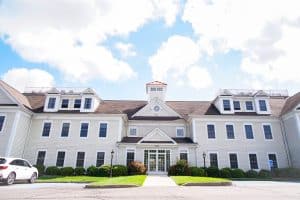 Our newest location in Cheshire brings the best of Connecticut Orthopaedics even closer to you.

In addition to general orthopaedic services, the practice provides specialized services for:

Click here for more information and to schedule an appointment today. 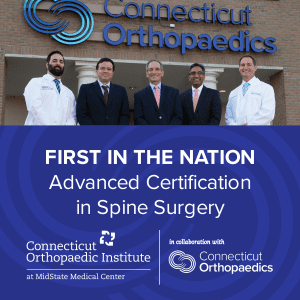 “This achievement demonstrates the commitment of our surgeons and staff at the Connecticut Orthopaedic Institute to high-quality patient care,” said John McCallum, M.D., COI medical director. “As the first in the country to receive this distinction, combined with our advanced certification in hip and knee replacement, our program provides a destination, right here in Connecticut, where a patient can confidently have access to some of the best care in the entire country.

The thorough, two-day, in-person review determined that the Institute met The Joint Commission’s stringent standards for advanced certification. The evaluation validated COI’s pre-operative care and education; standardization of practices, procedures and care for patients; and emphasized everything from pre- to post-operative consults with the spine surgeons to communication and collaboration between clinicians. It also evaluated the consistent use of care teams and compliance with clinical practice guidelines. In addition, the Joint Commission determined that the Institute met rigorous standards of care based on data collection guidelines, and participates as required in the American Spine Registry, which measures clinical complications and outcomes. To be eligible for the certification, the Institute must have served at least 200 spine patients.

“Our first-in-the-nation achievement of this certification is a testament to the exceptional, patient-centered, coordinated care for spinal surgery patients,” said Joel Bauman, M.D, chief of neurosurgery for Hartford HealthCare’s Central Region. “Our first-class multidisciplinary team has led the way to improved spine surgery experiences and outcomes. We look forward to the continuous improvement journey in care of our spine surgery patients in the years to come.”

Spine disease is one of the most prevalent diseases, with more than 1.2 million surgeries performed each year in the U.S., according to the National Center for Health Statistics.

World-class care and convenience were the founding principles that launched Connecticut Orthopaedics as a small, two-physician practice in 1963.

It was with this mission in mind that we created our continuum of care – a process designed to guide our patients from consultation, to diagnosis, treatment and rehabilitation, all under one roof, at the highest level, and close to home.

With a range of services that includes urgent care, imaging, sports therapy, rehab, and a orthopaedic-only outpatient surgical centers, our patients benefit from a seamless transition of care, often leading to improved outcomes and experiences.

“The continuum of care we’ve created allows us to provide better service to our patients,” said Dr. Patrick Ruwe, President of Connecticut Orthopaedics. “There are no gaps, no scheduling difficulties, no long waits to get test results – and it all happens in a comfortable setting close to where our patients live, it’s invaluable.”

Connecticut Orthopaedics physicians are rooted in the communities they serve, but bring with them training and experiences from many of the leading institutions across the U.S.

“Our physicians have all gone to top-tier schools, received premier residency training and gone to the best fellowship programs in the country,” said Ruwe. “They’re exceptionally well trained, have enormous clinical experience, and are integrated members of the community – that’s a very significant combination.”

With an unrivaled breadth of services and world-class surgeons and doctors specializing in every aspect of the musculoskeletal system, there’s simply no better choice for your orthopaedic care than Connecticut Orthopaedics. 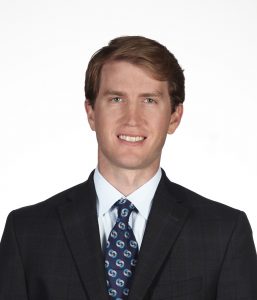 Dr. Jordan Gruskay is a surgical sports medicine specialist treating conditions of the shoulder, knee, hip, and elbow, with a focus on knee and hip preservation. He grew up in Bethany, CT and attended Amherst College and the Yale University School of Medicine.

Dr. Gruskay completed his orthopedic training at the Hospital for Special Surgery (HSS), where he discovered his passion for sports medicine, treating athletes from the New York Giants, Mets, Knicks, and Brooklyn Nets. He completed a fellowship in Vail, Colorado at the renowned Steadman Clinic and Steadman-Philippon Research Institute. As part of the National Olympic Committee Medical Center, Dr. Gruskay spent time taking care of athletes from the U.S. Ski & Snowboard team and continues to be a physician for the team.

He will be seeing patients in four different offices: 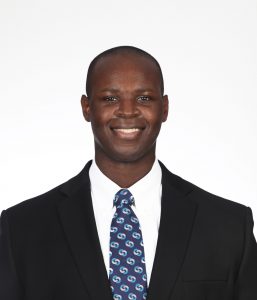 Dr. Kenoma Anighoro is an orthopaedic surgeon specializing in joint replacement surgery. Dr. Anighoro grew up in Jersey City, New Jersey. He attended Yale University and the Geisel School of Medicine at Dartmouth.

Dr. Anighoro completed his orthopaedic surgery residency at the Medical College of Wisconsin, a clinically focused teaching institution. Dr. Anighoro completed additional training in complex hip and knee replacement at the Dell Medical School of the University of Texas at Austin. There, Dr. Anighoro was involved with the development and implementation of comprehensive, high quality musculoskeletal services focused on maximizing measured patient outcomes in joint replacement.

He will be seeing patients in three different offices: 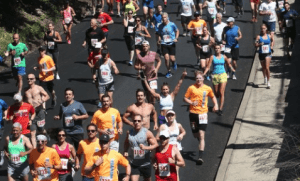 Connecticut Orthopaedics is proud to sponsor several area road races in 2021. In addition to sponsorship, our expertly trained physical therapists will be on site to answer questions and interact with runners and guests. 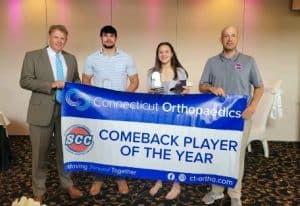 Two student athletes – Skylar Burzynski (Amity Regional) and Lucas O’Reardon (Lyman Hall HS) – are the recipients of the 2021 SCC “Comeback Player of the Year” awards. Both students suffered severe injuries, yet were able to overcome them to become outstanding role models in their respective schools.

A corporate sponsor of the Southern Connecticut Conference (SCC), Connecticut Orthopaedics has offered a Comeback Player of the Year Scholarship for student-athletes who participated in an interscholastic sport during the 2020-2021 academic year and showed great leadership both on and off the field after their severe injury.

“This is our 11th year awarding student-athletes from the SCC with scholarships,” said Glenn Elia, CEO of Connecticut Orthopaedics. “Our goal is to acknowledge student-athletes who have overcome the challenges of an injury and, through hard work and determination, become positive role models for their fellow teammates. As sports medicine specialists, we understand intimately what it takes to recover from an injury and return to playing sports at a high level.”

“Many thanks to the doctors and staff at Connecticut Orthopaedics for their support of the SCC and these scholarships over the past decade,” explained SCC Commissioner Al Carbone. “Our league has many outstanding student-athletes who excel in the classroom and on the playing fields; but it is a tremendous gesture to recognize traits like courage, perseverance and selflessness, especially in an unprecedented year as we have experienced.”

A two-sport standout for the Lady Spartans, Skylar tore her ACL two weeks before her junior basketball season.  Despite being injured, she came to practice every single day to support her teammates, all while being diligent with her rehabilitation.

She was named captain for her senior year and led the Lady Spartans to the SCC Division I playoffs.  One of the team’s leading scorers and rebounders, Skylar was selected to the All-SCC West Division team.    This spring, she was an integral part of Amity’s lacrosse team which reached the SCC Division II championship game.

Skylar will attend Norwich University in the fall with plans to major in exercise science/physical therapy.

A two-sport standout for the Trojans, Lucas suffered a severe neck injury called Clay Shoveler’s fracture that required emergency surgery during the fall of 2019.  His injury short-circuited a promising junior football season that saw him still earn All-SCC Division III accolades after catching 46 passes for 631 yards and five touchdowns, and making 87 tackles and three interceptions.

Following his injury, he missed the basketball season and then the 2020 football season was not played.    Lucas’ determination and work ethic carried him through his rehabilitation and he came back to lead the Trojans’ basketball squad to the SCC Division II title and was named to the All-SCC East Division team.

Lucas will attend the University of New England in the fall and intends to major in physical therapy.